things to do in the UP

The past two weeks have seen several multi-day warm ups. In most places this would mean that snowbike trails become ribbons of unrideable mashed potatoes that only get worse when they freeze. But, if you live in Marquette it means that the wonderful groomers from the Noquemanon Trail Network (NTN) Single Track Section put in some serious hours to ensure that our trails are top-notch when the inevitable freeze comes.

The NTN groomers have come up with some very unique grooming implements that suit our local climate. Their hard work and innovation is the subject of a great new short called “Whack Jobs.” It’s a true testament to those hardworking volunteers that make winter riding not only a possibility but a real pleasure.

The riding has been stellar so far in 2018. Despite the warm weather, as long as the temps drop overnight the trails are primo early in the morning before the sun hits them. In these few precious hours the planets align and you can really rip.

This weekend my friend Tim came up from Wisconsin to revel in our beautiful trails. I set up the GoPro and we went to the woods. Check it out!

Did you get out and get after it this weekend?

If you haven’t heard, Michigan’s Upper Peninsula is a mountain bike lover’s dream. Many major cycling publications have sent teams of riders to report back to the rest of the world on our riding. (For reference check out: Da Yoopers and PinkBike). World-class trail systems can be found in Houghton, Copper Harbor, Ishpeming and Marquette. The towns have apparently come to the realization that cycling tourism is a real thing. The rich natural resources of the UP are ideal for mountain bike trails.

Munising, home of the world famous Pictured Rocks National Lakeshore, is in the process of putting some serious singletrack in place. As part of their new trail the Munising Bay Trail Network decided to create a skills loop and a jump line. I first heard about the jump line through instagram. I follow Landowski Trailworx, LLC and they started posting some beautiful berms, jumps, bridges, and rock gardens. I saw that they were geotagging some of their feed in Munising. The trail looked like it had some solid lines.

Last weekend I invited Tim up to Basecamp and we loaded up the full squish bikes and headed East. We stopped at Hillside Party Store for snacks then unloaded in the gravel parking lot.

Initially we started climbing on a super nice crushed gravel pathway but soon found out that this trail was under construction. As best as I can tell this was the new connector to the Trust Fund Trail.

We started over and climbed the gravel road to the start of the current singletrack loop. The short climb is not fun at all, but it gets the blood flowing and builds stoke. We entered the trail at the end of the jump line.

From the bottom of the line you get a great perspective of the run. Looking up you see several deep berms, tabletops for days, and a sweet arched roller bridge.

We lugged to the top and we were drooling the whole way up. There are two routes up: the quickest is a shortcut to the top; the other a longer scenic route. We opted for the shortcut most of the time. At the top of the line you get a sense of why its called “Superior Air.”

The Superior Air line is a blast. The current line starts out slow with a few rollers but quickly builds with tabletops that increase in size after the first two berms.  I was able to really let loose after the first lap and then it was on.

There is a little something for everyone on Superior Air. Every tabletop can be rolled and the final double is very easy to manual over or roll. Honestly though, this trail was made to be railed.

Munising is getting rad. I’ve heard good things about the Valley Spur singletrack. Hopefully that gets expanded soon. I would like to see a loop there. 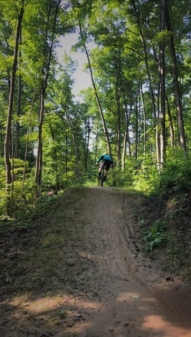 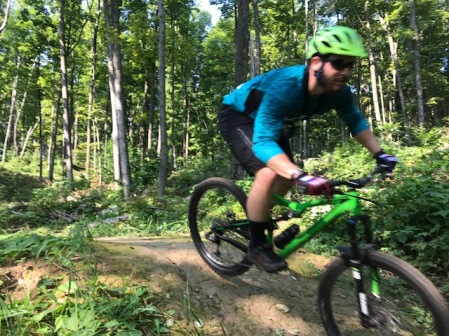 The pace of Superior Air is great to safely learn how to hit small to medium size dirt jumps in a gravity setting. I am following Landowski and Munising Bay Trail Network anxiously awaiting the opening of the next phase. It has some nice looking roll-ins, rock gardens, and gaps. I am pumped!

On the way out of town the smell of pasties wafted through the car. We had an afternoon of riding planned in MQT so we opted out of the hefty hand pies, for now. We’ll be back.

Last week was quite stressful; work went late into the night tuesday-thursday and the puppy kept us up most of the night after that. I needed some kind of release. So, I put a little challenge to myself up on the blog. I committed myself to a “Big day.”

Essentially it was a nice leisurely-paced gravel/road ride up to Big Bay and back. But for me it represented a little more. It was proof that I could set a goal and achieve it. Sometimes we spend too much time working toward intangible things that seem to never come to fruition. Sometimes the upward tick of our bank accounts becomes a meaningless safety-net of numbers that we all know could be wiped out in a matter of seconds. Sometimes we rely on other people to do too many things for us. Personally, when I hit that wall, as we all do from time to time, I need to do something on my own accord. The last time that happened I hand split 10 cords of firewood. Talk about seeing the fruits of my labor. It was such a rewarding feeling seeing the rows grow and the pile of whole logs dwindle. I needed to do something like this again to reignite that feeling: accomplishment.

So I created a challenge for myself, and as you know I made it public. I have never done something like that before and I am pleasantly surprised to say that it worked.

When Saturday arrived the bike was loaded and the route carefully planned to avoid interaction with vehicles and people in general. I took off into a minor headwind which made the first 12-15 miles pretty miserable. But something clicked when I crossed the big bridge on CR 510. 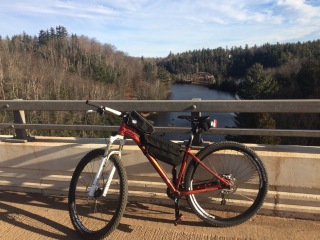 I saw fewer cars and could feel that the remote gravel section was getting close.

This is where the trip really began. I have driven this road a number of times. It is quiet and it is wild. Rarely do you see a vehicle or structure. It is the perfect place to spin gears and unwind.

And spin I did. For the most part I had the gravel to myself. However, once in a while a hunter on his way to deer camp would blast past me on a side-by-side. In those moments I felt as if I were in some post-apacolyptic Mad Max scenario. I would laugh to myself and draw up images of some marauder chasing me down on my pedal bike and I would thwart him at the last moment with a well-placed juke.

I was warned by a friend to eat hourly even if I wasn’t hungry. Turns out that wasn’t all that hard. I lunched on the banks of the Yellow Dog. Jerky and fig bars have never tasted so good.

As the tannic waters flowed past I was able to completely give myself over to the rhythmic churning and the trance-inducing ripples. In that moment I was safe to release my mind and all of the worries and cares in it. It was beautiful. If you find yourself starting to get wound up head to a quiet stretch of river and watch it do its thing for a while. “I’m not saying that a river is a cure-all, only that your brain is unable to maintain its troubled patterns while in concourse with a river.” -Jim Harrison, The Beast God Forgot to Invent. (On a side note that man will forever be missed and I look forward to incorporating many of his gems in and around this blog.)

The rest of the ride was rather uneventful. I got in some good charges and even managed to launch into a few of those “yawps” that those Transcendentalists were always talking about. Rolling into town felt good. I had accomplished something and I had no one to thank but my own two legs.

My older generation Stache probably wasn’t the most efficient choice of bikes for this ride but the extra forgiveness in those larger tires and the suspension fork made it a little more comfortable and forgiving. 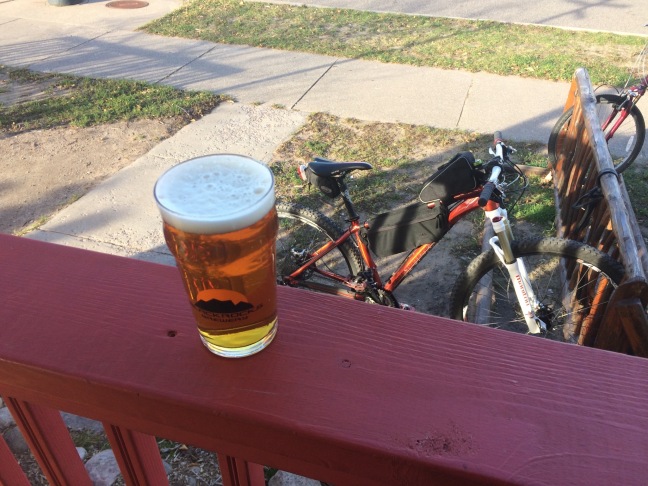 I dubbed this trip “The long way to Blackrocks” because in all honesty there is no longer route from my home to that wonderful brewery. Upon arriving I grabbed a 51k and sat on the porch looking at my bike. I thought about the places I have taken it, and the places it has taken me. Good gear is worth its weight in gold. But there is something special about the bond that you form with a bike. After the brew I spun over to Border Grill and had some tacos and chips.

This is the first of many rides that will start on CR 510. While planning my ride I was very excited to see all of the roads that branch off 510 and head into the McCormick Tract.

The pic below is the Strava info from the ride. I really enjoy quantifiable results and since I have started using Strava I have found the joy and worth that I have always felt while biking to be measurable. 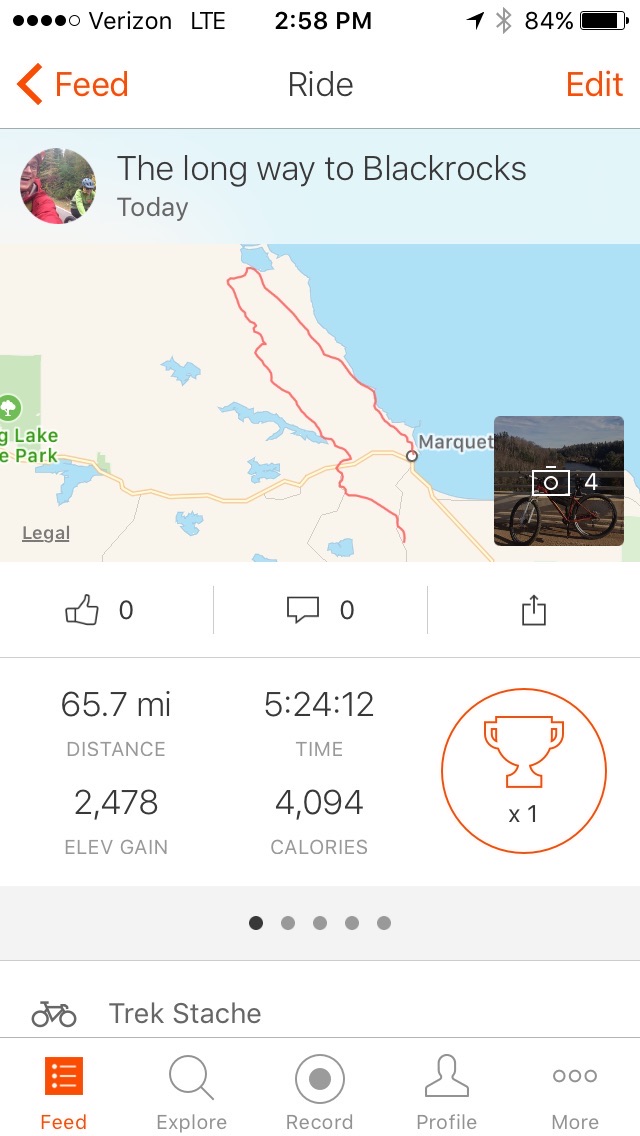