If you haven’t heard, Michigan’s Upper Peninsula is a mountain bike lover’s dream. Many major cycling publications have sent teams of riders to report back to the rest of the world on our riding. (For reference check out: Da Yoopers and PinkBike). World-class trail systems can be found in Houghton, Copper Harbor, Ishpeming and Marquette. The towns have apparently come to the realization that cycling tourism is a real thing. The rich natural resources of the UP are ideal for mountain bike trails.

Munising, home of the world famous Pictured Rocks National Lakeshore, is in the process of putting some serious singletrack in place. As part of their new trail the Munising Bay Trail Network decided to create a skills loop and a jump line. I first heard about the jump line through instagram. I follow Landowski Trailworx, LLC and they started posting some beautiful berms, jumps, bridges, and rock gardens. I saw that they were geotagging some of their feed in Munising. The trail looked like it had some solid lines.

Last weekend I invited Tim up to Basecamp and we loaded up the full squish bikes and headed East. We stopped at Hillside Party Store for snacks then unloaded in the gravel parking lot.

Initially we started climbing on a super nice crushed gravel pathway but soon found out that this trail was under construction. As best as I can tell this was the new connector to the Trust Fund Trail. 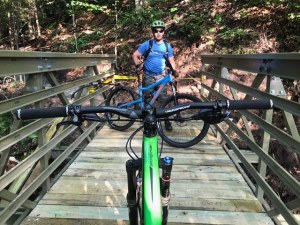 We started over and climbed the gravel road to the start of the current singletrack loop. The short climb is not fun at all, but it gets the blood flowing and builds stoke. We entered the trail at the end of the jump line.

From the bottom of the line you get a great perspective of the run. Looking up you see several deep berms, tabletops for days, and a sweet arched roller bridge.

We lugged to the top and we were drooling the whole way up. There are two routes up: the quickest is a shortcut to the top; the other a longer scenic route. We opted for the shortcut most of the time. At the top of the line you get a sense of why its called “Superior Air.”

The Superior Air line is a blast. The current line starts out slow with a few rollers but quickly builds with tabletops that increase in size after the first two berms.  I was able to really let loose after the first lap and then it was on.

There is a little something for everyone on Superior Air. Every tabletop can be rolled and the final double is very easy to manual over or roll. Honestly though, this trail was made to be railed.

Munising is getting rad. I’ve heard good things about the Valley Spur singletrack. Hopefully that gets expanded soon. I would like to see a loop there.

The pace of Superior Air is great to safely learn how to hit small to medium size dirt jumps in a gravity setting. I am following Landowski and Munising Bay Trail Network anxiously awaiting the opening of the next phase. It has some nice looking roll-ins, rock gardens, and gaps. I am pumped!

On the way out of town the smell of pasties wafted through the car. We had an afternoon of riding planned in MQT so we opted out of the hefty hand pies, for now. We’ll be back.

Every Winter things start happening in Munising, Michigan. You’ve got the normal Winter activities: ice fishing, snowmobiling, xc-ski, fat biking, and snowshoeing. But for many years Winter has also brought another activity to Munising, ice climbing. Ice climbing is climbing of features such as icefalls, frozen waterfalls, and cliffs and rock slabs covered with ice refrozen from flows of water. It involves lots of wicked gear, physical strength, determination, dynamic moves, good people, and takes place in some bitter environs. I dabble in many outdoor sports and for some reason ice climbing was not on that list. So, for 2017 I decided to give it a shot.

Mission: Learn how to find and climb rad ice just down the road in Munising.

Solution: Take the Intro to Ice class at the Michigan Ice Fest. 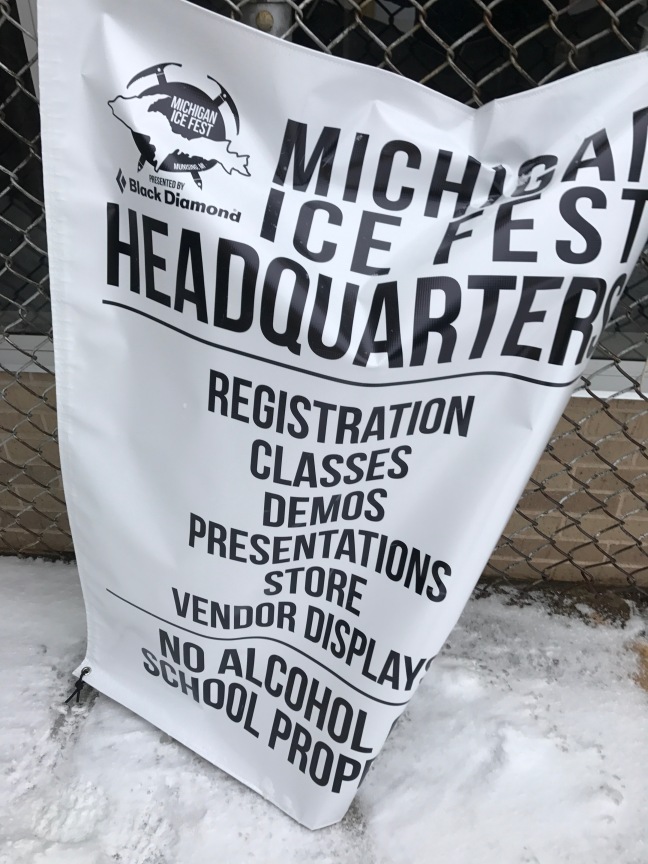 For some reason, I did absolutely no training for this event. Nor did I geek out over the gear before trying it. The reason for this uncharacteristic approach is due to the limited timeframe for ice climbing and relatively high cost to get rigged up. I didn’t want to go all in only to find out that I hated being out there all day. I figured that in order to make sure I gave it a fair chance I should have some guidance and have the right gear. So, in November I took the plunge and signed up for the intro class which would provide a guided trip and demo gear from the top brands.

The week before Ice Fest I was pretty worried about the forecasted weather: hovering temps in the 30’s and 40’s. Not exactly stellar for ice formation. Luckily for my class Mother Nature had a change of heart, turned on the snow machines and fired up the ice maker. To say that we picked the perfect day for our class is a complete understatement.

We picked up our demo gear at the elementary school in Munising, piled into rented cargo vans, and headed out to the Curtains. Our group was assigned two experienced ice climbers named Joe and Alec. Their advice was succinct and pointed: this is dangerous but it also super fun! Be safe and have fun. We went over basic knots, crampon usage, tooling, and body placement. After the introductory info was out of the way we got to learning. Place the tools; set a steady base; keep weight on your legs; and look for the concavities for natural tool placement.

The Curtains are formed by groundwater seeping through the porous sandstone. In this area it forms wide sheets of ice instead of the pillars found in other places. It really provided a nice place to learn. For the most part the ice was very solid on the first two routes. It helped to build confidence and simple skill. Most of the ice was dry, but because the sandstone doesn’t stop weeping there were a few routes that had some pre-ice (running water) going on. Water running down the ice tools added some added difficulty. This is totally necessary though and allows the ice to be “reset” after a day’s worth of the climbing. Nature is pretty damn cool. 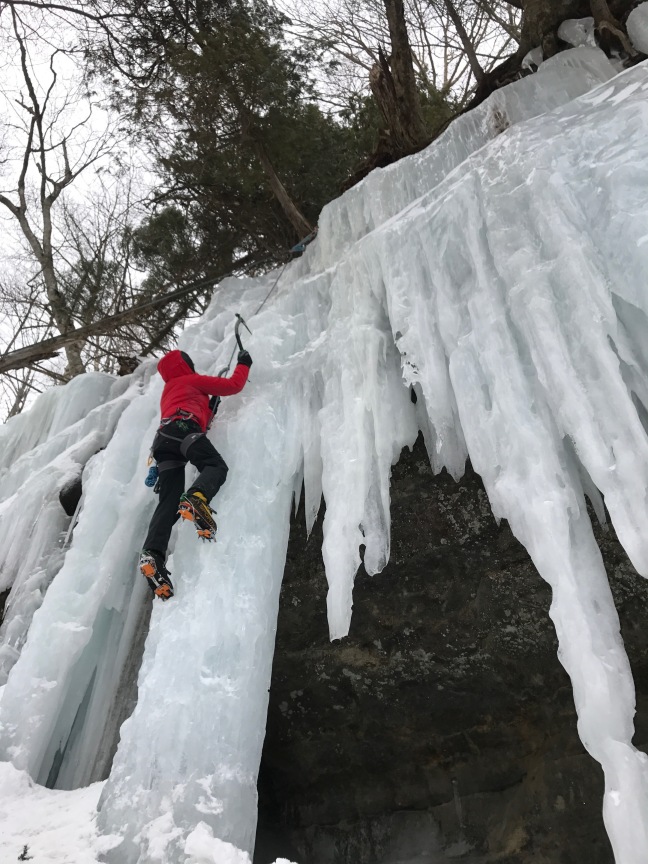 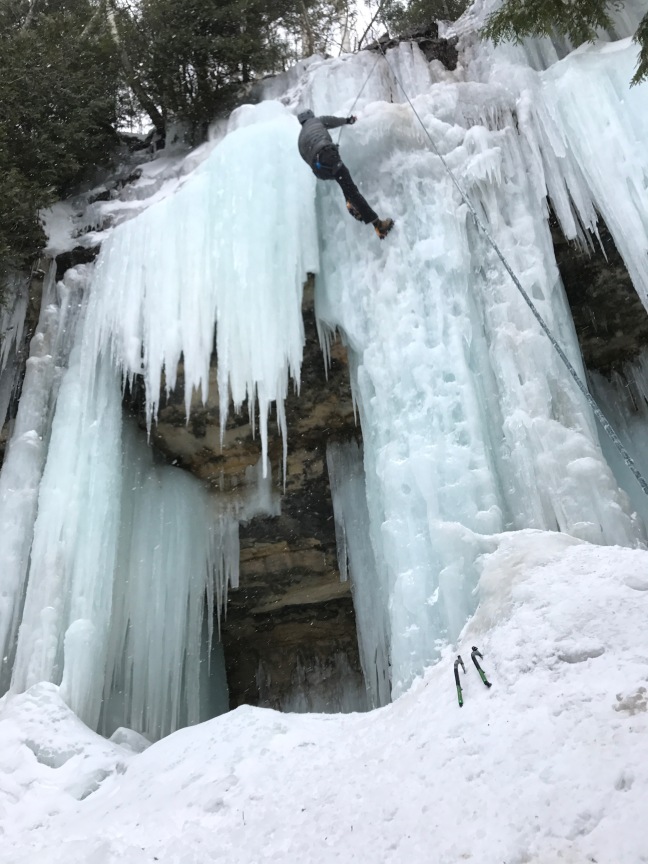 As the group progressed we moved to some longer climbs requiring more precise tool placement and appropriate rest periods.

I have climbed on gym walls before and even had a woody in our apartment in Ann Arbor but none of that compares to being out on exposed rock and ice with a fierce North wind blowing in fresh snow. It was everything that I hoped it would be. This is exactly what I expected life in the Upper Peninsula would be like when we decided to move up here.

The festival runs through Sunday and plays host to many professional athletes leading climbs and giving talks. I highly suggest you drop whatever you have planned and make the trip to Munising, even if you come just to watch. I have to work the rest of the week but we will be going back on Saturday to meet Brendan Leonard and hopefully get my copy of The New American Road Trip Mixtape signed. I really want Chelsea to read that book before our honeymoon.

Time to start rounding up some new gear for next year. Let me know if you want to go ice climbing in the Munising area, I will definitely be down.

Get out there and enjoy this life.

Went out for a ramble on the new Corner Bars. These are the bars that we’ve all been looking for.
Dang it, I love September.
Gravel magic.
There is so much magic out there…
Vibes from Sands Township this morning.
Love this bouncy bridge but I am stoked for the new one!