One thing that has been added to that list is racing, lotsa racing. Now, I’m no racer boy. Yes, I wear spandex and I like to go fast, but no one would call what I do racing. That being said I am signing up to race in 2018 because I need it. It’s also going to allow Chelsea and I to run around a bunch. Chelsea is even planning on doing a few running races.

I’ll put a list of races and places in a future post. Of all my planned races I’m most stoked for the HAMR. Why is the stoke so high? Click this link and you’ll see why.

Maybe the HAMR is an adventure race.

Maybe the HAMR is a bike race.

Maybe the HAMR is a sadistic spin through the north woods.

All I know is that I’ll be anxiously tucked into my sleeping bag waiting for what I can only hope will be a black metal wake up call at Forestville. May the woods be filled with shreddy guitar solos before we all pedal into the darkness.

I hope I don’t get nailed… Let’s HAMR.

Day 5 was supposed to strictly be a travel day; point it east and go as far as possible. But on our way out of the campground the distractions started. We followed the signs to Cape Meares. We weren’t quite sure what it was but deep down we really weren’t ready to leave the coastal region and would do anything to prolong the inevitable so we took a segue to Cape Meares.

Cape Meares park has a cool little lighthouse, excellent views, and the most unique Sitka Spruce called the Octopus Tree. 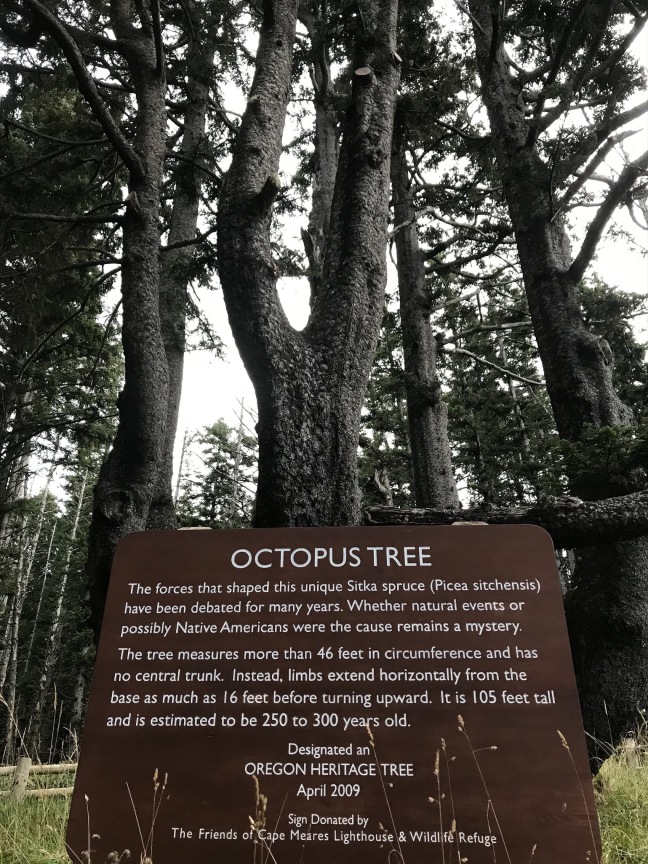 After Cape Meares we started a slow trek toward Portland through the Tillamook state forest. On the way through we stopped at a few waterfalls and even tried to take a ridiculously skinny mountain road… needless to say we had a super sketchy turnaround. Ultimately, we made it to Trader Joe’s and REI to restock then navigated a weird Siri-route to get to Justin’s for the box we shipped out. 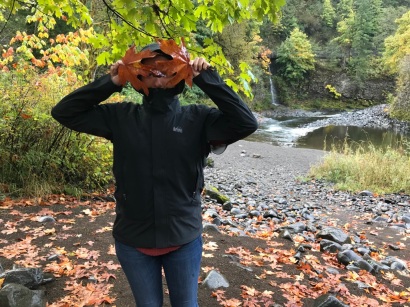 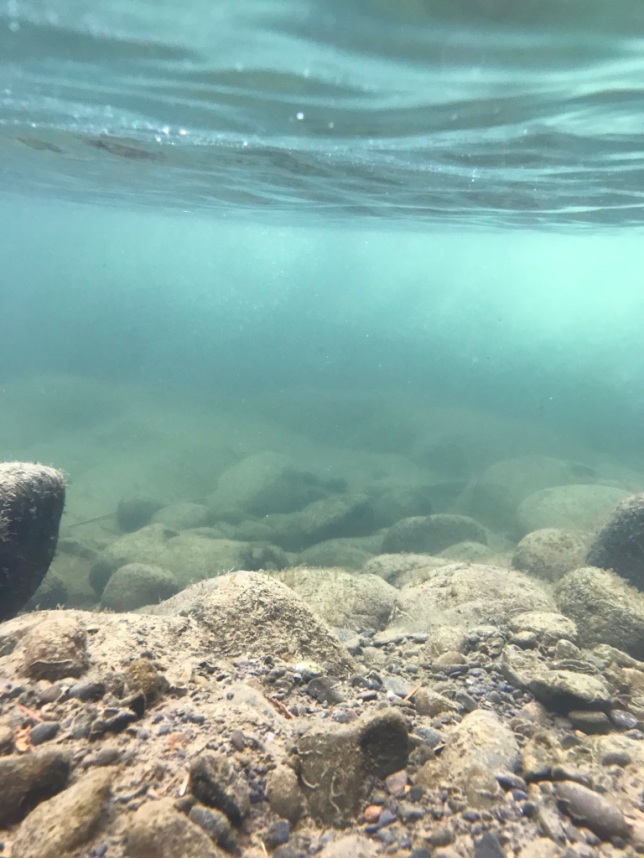 Prior to the Eagle Creek Fire we had planned to stay in that area a few nights. The rivers, waterfalls, and hiking in this area are second to none. Above all else we wanted to see Multnomah Falls. Unfortunately due to the actions of a 15 year old boy who has yet to be named we were robbed of those experiences. A few weeks before our visit said 15 year old was seen tossing fireworks into the gorge which lead to the Eagle Creek Fire. While the fire is still technically burning it’s estimated that the fire devoured over 48,000 acres. The resulting scars on the landscape will forever change the gorge. The drive through the gorge was still pretty, it was just another reminder how awful people are. Very sobering.

We camped at the Deschutes River Recreation Area where it dumps into the Columbia River. The campground was right on the riverbank and the facilities were very clean. We ate Annie’s ravioli, drank PNW IPA, played our new National Parks Trivia game, and slept hard.

This is how every travel day should end.

Day 4 we awoke quite warm thanks to an extra blanket. Have I mentioned how much I look forward to insulation in Vinny?

Our destination de jour was Tillamook and I wanted to have coffee with a little view so we secured the load and started driving. We pulled off the road just as first light made an appearance and brewed up some coffee while overlooking Nehalem Bay. For some reason I couldn’t stop thinking about shellfish and mollusk gathering in that bay. It was actually like a little mini obsession while we were in that area. I almost bought a book on harvesting. Truth be told, I didn’t eve want to eat them I just wanted to see some. I digress.

We spent most of the morning checking out roadside pull-offs. Each one was quite pretty, but didn’t really hold a candle to what we had seen in the previous two days.

Just north of Tillamook we saw a sign for Kilchis Point Reserve. It appeared to be a small park/nature reserve offering a trail to some wildlife viewing on the bay. The reserve had a beautifully built trail system with many informative plaques along the route. It was raining pretty hard so we did not read them all. There is one in particular that I was very happy to have read: reptiles of Kilchis Point. It showed three slimy little animals. I though that it was just a cool sign covering creatures that in theory could live at the reserve. I never thought that we would see any of them. That is until the rain brought out the newts. They were all over the trail.

When we were in grad school Chelsea and I worked for a family that we will forever call “the most extraordinaire people that we have ever met.” He owned and operated a large car company and she was a movie star. His father had patents on many automobile parts, and her family were some of the settlers of Portland. Long way to say that Tillamook Cheese has special meaning to us now following Her indoctrination. Therefore, we made it a point to make a pilgrimage to the Tillamook Co-op. Tillamook is a very unique area in Oregon. It’s a group of lush plains areas with rich soil nestled between the Pacific Ocean and Oregon’s coastal mountain range. A series of rivers run through the plains and feed into Tillamook Bay. Between the rivers many groups of very happy cows make some of the best dairy. Driving south you just kind of pop out of the mountains into this beautiful hamlet.

When we got to the visitor center we found out that we would not be able to take a company tour because they are hard at work erecting a new super visitor center to be opened Spring 2018. I guess we will have to make a return trip next year… The temporary center did not disappoint. It has historical information regarding the creation of the farmer’s co-op and also information on the cheesemaking process and cows. Most importantly the visitors center has cheese samples, cheese for sale, and many many many different grilled cheese sandwiches!

We learned, laughed, shopped around, and ate a lot of cheese. Of course we stocked up on cheese for the return trip.

With full bellies and our fill of human interaction for the day we took to the woods. First stop: Munson Falls. While sailing down PCH we saw a very small sign pointing us toward Munson Falls. We knew that we wanted to check Munson out from our reading in An Explorer’s Guide to Oregon. The book said that this is 319 foot waterfall is the largest in the coastal range so the unassuming roadside sign made me second guess the book’s glowing review of Munson. I am very glad that we trusted the book.

Caption: It’s hard to believe that the fields we drove through to get to the falls would abut this lush old growth. Vinny seemed to really like it.

As the rainy morning moved on a sunny afternoon layed itself out in front of us. Up to this point we had had a pretty full day: beaches, newts, cheese, and waterfalls. We were ready to find a place to bed down. Unfortunately, we just kept finding cool things to do. As we turned toward the ocean we left the cows and pastures and started to climb. We kept going up until a surprisingly nice parking lot appeared. The parking lot was for the Cape Lookout trails. Without any internet connection we had no clue what to expect. We could hike to the beach (way the heck down there); take the Cape Lookout Point Trail; or hike to the campground. The posted trails map looked promising and we knew that we were quite high up so we picked the Cape Lookout Point Trail and started out.

This bench cut trail heads west from the parking lot through a stand of towering Sitka Spruce. As you continue down the trail the ground quickly disappears to your left but the trees remain. It switches back and forth along the Cape Lookout point. We didn’t make it to the end of the trail due to some very slippery conditions. However, the views along the way were stunning. 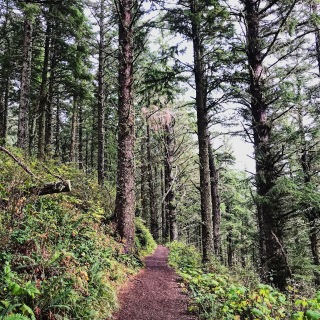 The trail is well maintained and is a must if you are in the area. Next time we come out we plan to make it to the end.

When we finally did bed down we found ourselves at the Cape Lookout State Park Campground where the campsites are essentially on the beach. The view out the backdoor was nothing to scoff at.

Because we were in the off season it was almost completely empty. We camped near the bathrooms and the beach entrance. Another windy rainy night in the van on the beach. Things could be much worse than this right?

Oh the places my bike takes me.
Today I gave away all of the alcohol in our house. I haven’t had a drink in almost 5 months. I gave it up on my birthday for health-related/cycling reasons.
Bikes and snow. What more can you ask for?
Let’s get a little sweaty…
Sunday morning doesn’t get much better than skating at Blueberry Ridge in Marquette.
Crisp morning on the North Trails with @thebiglakemi and our winter toys.