So let’s start at Day -1: We go married on Saturday October 7, 2017. It rained like crazy so we were forced to get married inside. It was an intimate ceremony with a small group of family and friends at the Ore Dock Brewing Company in Marquette. We wrote our vows; it was a true culmination of the life that we have created together complete with the standard love and trust language but we included fly fishing and homemade pizza. Everyone was dry and able to enjoy the party afterwards.

Day 1: The Marquette to Chicago flight went off without a hitch. By the time the beverages were distributed we were beginning our descent. Upon landing I was constantly checking my watch and phone and doing calculations and speculations… you see, when I bought the tickets I failed to factor in the human element of travel. We had 36 minutes to deplane and get onboard the flight to Portland. On paper it looks like a no-brainer. Get off grab a coffee and head to the next flight. The second that people found out about the short layover they doubted our ability to make the connection. Well, I am happy to say that we got off the plane quickly thanks to the efficiency of other Midwest passengers. We jogged to the next gate and even had time for a quick bathroom break!

We got off the plane, grabbed our luggage and hopped into Bob’s car. Who is Bob and why do I write about him with such familiarity? Well, you see, Bob Kelly is the commercial vehicle salesperson at Northside Auto and Truck. I met Bob over the phone and told him what we were looking to do. Through many emails, texts, and FedEx envelopes Bob and I got to know each other. When he picked us up he told us about PNW history, the Oregon Trail, and Portland’s growing homeless situation. 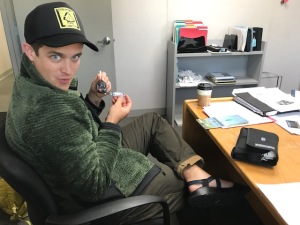 He was very nicebut I had a one-track mind at thatpoint.We got to his office and chatted while the new member of our little family was getting its bath.

He’s a 2017 Ford Transit 250 with 148′ wheelbase and the midroof. He was big an empty, a true blank canvas. We will be dedicating large portions of the blog to him in the future but suffice it to say this is our new adventure rig. Total van life would not really be dirtbag yuppie. Let’s call our personal philosophy VanLite. More on that later too.

With our empty van we headed to suburban sprawl to pick up some light trappings for our return trip. IKEA and Target served as our fist stock-up site. Although it’s all in a pile in the back of the van we have the basic necessities now! 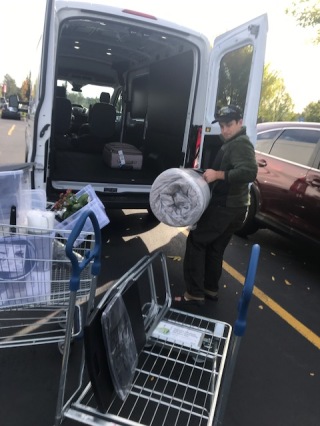 Due to the fact that we didn’t have time to lunch or breakfast after unloading our carts we crawled back into IKEA and devoured the, “most delicious hotdog” of Chelsea’s life.

We bunked at the Jupiter Hotel. It’s a groovy reboot of a 1960’s hotel. Check it out. I suggest the “mild side.”

Dinner at Burnside Brewing brought my first real taste of a fresh PNW IPA. I had the Isomer and was not disappointed. Bottled stuff is pretty good but fresh from the tap simply cannot be beat.

Today, we leave the city.

Hopefully by tomorrow we will be used to the time difference.